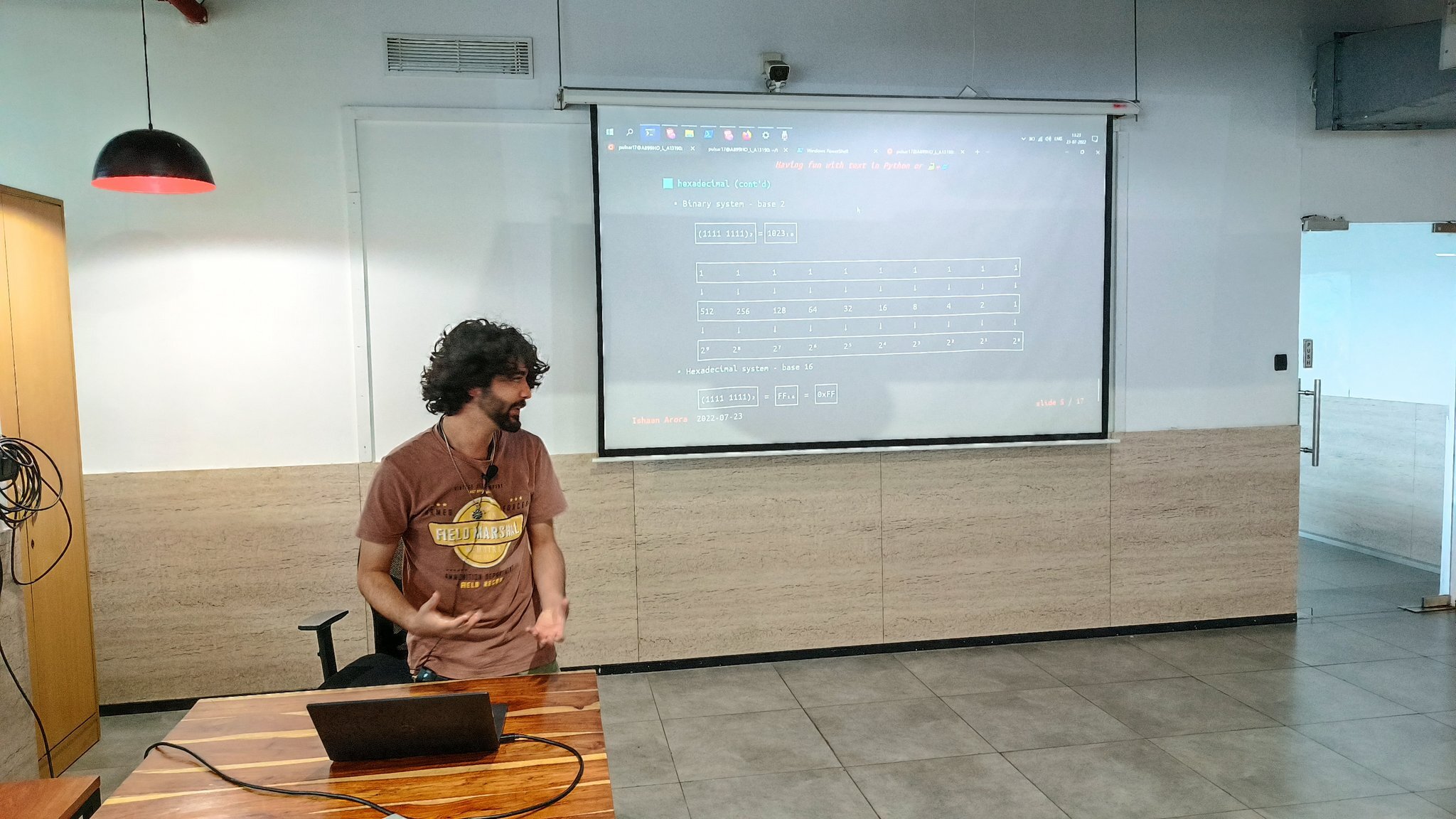 Me explaining a slide

✅ Give a talk at a meetup

So on 23rd of July, 2022, I gave a talk at the local PyDelhi meetup about Unicode and Python. You can find all the information about my talk in this GitHub issue - pydelhi/talks#200

I talked about text, Unicode, and Python's support for Unicode. The talk was around 45 minutes long.

After explaining some basic concepts of Unicode, like what is a character, what is a codepoint, I also explained how these concepts are accessible in Python. I ran a script that I had created for this talk. I then went on to making small tweaks in the script and explaining the output of those changes.

After that I explained the concept of encodings, and why you should default to the utf-8 encoding. I wasn't able to spend as much time on it as I would have liked to. Admittedly, I prepared the first half of my talk better than I did the second part.

Many people also had questions which I tried my best to answer.

How I prepared for this talk

I proposed the talk on 29 June, 2022. So, I had around a month to prepare this talk. First I had to select 'where' and 'in what' I would write the slides. I did not want to make a ppt(they are boring), I was also aware of some javascript libraries that would allow me to present my slides in the browser. But it was a Python conference and I am not too fond of javascript. After sifting through Reddit, I stumbled upon lookatme.

The gist is - you write your slides in Markdown and then lookatme renders it in the terminal which I felt was very very cool!

So I both wrote and presented my slides on the terminal.

I also went as far as writing a Lua plugin for neovim to help present the output of scripts.

The plugin just displays the output of current script in a beautiful yellow colored floating window. I set up some keybindings too for it, namely:

For now this plugin lives in the talks repo. I might release it as a separate plugin someday if I get enough time.

I had so much fun - both before while preparing the slides and on the meetup day itself. I plan to give more talks in the future. I met so many new people there, each with a different background (I met a professional diver 🤿 from the Andamans, who could have thought that!?). I also hope that I meet more such people.